Micah Schwaberow, born in 1948, lives in Santa Rosa, California. Makulianga, traditional woodblock printing, is especially suited to Schwaberow’s skills, beliefs, and personality. He sees himself as a craftsman and likes using and caring for tools. He also likes “the challenges of figuring out all of the pieces that go together to make the final image” of a woodblock print.

In the early 1980’s Schwaberow attended master woodblock printer Toshi Yoshida’s one month class for foreigners in Miasa, Japan. But a month of woodblock printing wasn’t long enough. Back home, he worked on a print of Yoshida’s mother who was ninety years old. When Yoshida saw the finished print it convinced him Schwaberow was serious about leaming to make prints and he invited the artist to study with him for a year in Japan. With his wife Linda’s encouragement, Schwaberow and his family moved to Nagai, two hours from Tokyo, in 1982.

The first evening in Japan, sitting in Yoshida’s living room having tea, the master said, “By the way, I don’t teach.” Schwaberow realized that while in the USA “the student is like a bird with its mouth open, being fed by the teacher, in Japan it wasn’t anybody’s responsibility to teach me, it was my responsibility to learn.” With extraordinary patience and respectfulness, Schwaberow observed “the ballet” of the printmaking process and applied it to his own work. He didn’t ask questions, he just watched. “I realized my only hope was to befriend the printers and carvers.” Schwaberow never received praise from anyone and for eight months he toiled on his prints by himself while observing the others work. The printmakers laid their tools on a thick black felt while Schwaberow used an old rag. He recounts how one day, “Heihachi Komatsu, the senior printer, came by while I was printing and took my cloth rag and put down one of those black felt cloths…. I felt like it was my diploma.”

Schwaberow’s woodblock prints, which are small treasures, consist mainly of subtle landscapes, still lifes, and line drawings of the female figure. “People have often asked me why don’t I make a really large print,” explains the artist. “If I go to the beach and I pick up a broken piece of shell and it’s very beautiful to me, it never crosses my mind, if only this were six feet tall, then it would be really swell.” By working small, Schwaberow explains, he is forced to condense what he is trying to say. “If you only have a small space to work in, you have to choose carefully and everything matters. I think of my work as color haiku, large places compresses, intimate glimpses through small windows.” The artist hopes that his reverence for his subject matter comes through to the viewer and “acts as a kind of medicine, or like a little piece of healing.” Schwaberow got the idea for Morning Mist, Heath Township on a trip he and his wife took around Ohio. The artist wanted to evoke a subtle misty early morning light which is difficult with a medium that has essentially hard, carved edges. “The strategies I empolyed were a close color palette, ‘feathering’ many of the carved edges, gradation printing to move the light across the surfaces, and most importantly, building all the colors in succession from all the preceding transparent layers.” It took the artist many weeks of proofing, or trial and error, to achieve a satisfactory result which meant printing 11 blocks 14 times. The edition of 250 required over 4,000 separate inkings and hand cranked passes on the press. A Herculean endeavor, Schwaberow works alone so that he can control every aspect of the process. 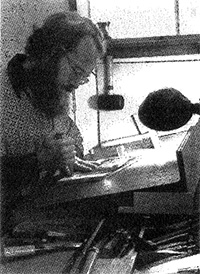